NSA’s eye on the next big thing. Quantum Computing!

Protecting banking, medical, business and government records around the world ?? Get ready, your data can be cracked. Yes, NSA is funding quantum computer work that it hopes will allow it to break virtually any encryption used today.

Leaks from Edward Snowden reveal a $79.7 million research program called “Penetrating Hard Targets,” including classified funding to research a quantum computer that could be used for cryptography.

The development of a quantum computer has long been a goal of many in the scientific community, with revolutionary implications for fields such as medicine as well as for the NSA’s code-breaking mission. With such technology, all  public key encryption would be broken, including those used on many secure web sites as well as the type used to protect state secrets. Even DARPA has devoted years of funding to quantum computing research, and Google launched its own “Quantum Artificial Intelligence Lab” last year. 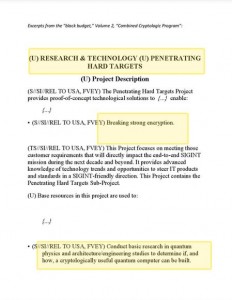 A large-scale quantum computer, however, could theoretically break a 1,024-bit encryption much faster. Some leading Internet companies are moving to 2,048-bit keys, but even those are thought to be vulnerable to rapid decryption with a quantum computer. What ever it is, They are planning something huge. Worry or not to be worry.

I never think of myself as an icon. What is in other people's minds is not in my mind. I just do my thing.
Related Items
← Previous Story Oh Dear, Google Patented Chats Into Comic Strips.
Next Story → Engineering Behind Foursquare’s Accuracy!