Dropbox Was Dropped! In perfect time.

Update: Dropbox is back!

“Dropbox site is back up! Claims of leaked user info are a hoax. The outage was caused during internal maintenance. Thanks for your patience!

No clouds and the internet seem clean for the  team last evening. Yes! It was hacked, but they denied and said the issue occurred during “routine internal maintenance.” After some time  the hacker group The 1775 Sec took to Twitter to state that they were responsible for downing the Dropbox website, and that they did so in in honor of late programmer and activist Aaron Swartz. Weird, right ??? We too thought the same! 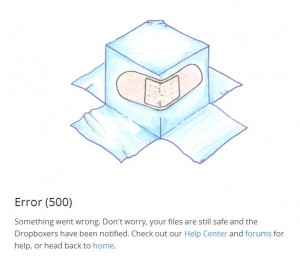 Another Twitter account claiming to be affiliated with the Anonymous hacktivist movement posted what it said was leaked information of Dropbox users. After some time, the 1775 Sec Twitter account claimed the information was a deliberate hoax, saying it only launched a distributed denial-of-service attack (DDoS) on Dropbox, and had not breached It’s security, nor compromised any of the user data.

“We are literally choking on laughter! We DDoS attacked #DropBox. Claiming its a data breach! This is so ducking funny?

This is developing and we didn’t get any firm info about it. Keep watching this page for the update!

Technology Enthusiast!
Related Items
← Previous Story Now, Any Google+ user can mail you without your address!
Next Story → Rumors: Windows 9 to be announced in April 2015!