End of an era: Winamp is shutting down on December 20, 2013. OK, that’s the old news! Once AOL announced that they are shutting down the service. The whole world was depressed tweeting RIP Winamp blah blah blah. Even me, Just leave it. Now, A great news for all. Winamp survives! Yes!

Radionomy, which provides one of the largest platforms for radio producers and broadcasters and the world’s largest digital audio advertising network through the business combination with TargetSpot, announced that it has acquired media player Winamp and internet radio platform Shoutcast from AOL.

A Winamp user has already found that Radionomy has acquired it silently in the Winamp forum. Their Name-server were updated. (Image Below). 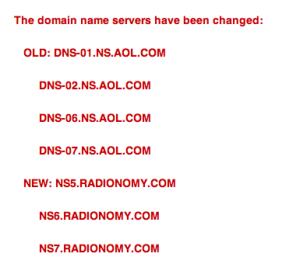 And they confirmed the acquisition today in a press meet! And announced the future plans.

“Winamp is a top independent player that gives millions of people the best player functionality available,” Radionomy CEO Alexandre Saboundjian said in a statement. “Its role will be clear in the future evolution of online media — we plan to make the player ubiquitous, developing new functionalities dedicated to desktop, mobile, car systems, connected devices, and all other platforms.”

Additionally, Radionomy will give Winamp listeners access to one of the world’s largest networks of online radio stations, spanning numerous music genres and cultures. As the newest member of the Radionomy Group, Winamp now offers:

AOL and Radionomy didn’t disclose the terms of the deal. They mentioned the future plan as Winamp: The future of the multi-device experience.

“Initially released in 1997 as a media player by two college students, Winamp gained popularity with the rising trend of MP3 file sharing, but increased competition from newer rivals, including online music streaming services — could have ultimately rendered it defunct for today’s Internet and computer users. Its parent company, Nullsoft, was acquired by AOL in 1999.”

I never think of myself as an icon. What is in other people's minds is not in my mind. I just do my thing.
Related Items
← Previous Story Twitter to roll out a new web design!
Next Story → No More Limits Says Spotify!