Schemer! How many of you heard it?? I guess not many. That’s why Google took a decision to shut down the service.

It’s a Bucket-List service from Google launched back in 2011 by a small group of Google engineers. It didn’t create enough buzz. But some people started to use the service thought it was pretty cool. It lets users make lists of goals, or “Schemes” that they wanted to accomplish, and then interact with other users who wanted to accomplish the same tasks. Let’s go deeper after this short video!

Schemer was launched two years ago as an invite-only service for sharing goals and discussing them with other people. A scheme is ‘a secret or devious plan’ (American Heritage Dictionary) and a schemer is a person who is involved in making these secret plans, so Google uses a mustache logo, a mesmerizing animated home page.

Once inside the site, users can add ‘schemes’ that they would like to implement, anything from “exploring a new city, checking out a friend’s movie recommendation, or just finding new activities for your weekends”. Also, tags and locations can be added, making it easy for fellow schemers to join you. The site also records the schemes that you’ve successfully carried out as a list of accomplishments. According to the site, the more you use Schemer, the better it gets at recommending activities for you, based on your track record.

The schemer is likely to be integrated with Google + and then failed to catch up. The folks over at Google-focused blog Google Operating System on Monday leaked  images of an internal version of the Schemer website indicating that it will be discontinued. And It’s official now. When I tried to access the schemer and this is it. If requested, Users can get the schemes back to their mail in 24 hours. 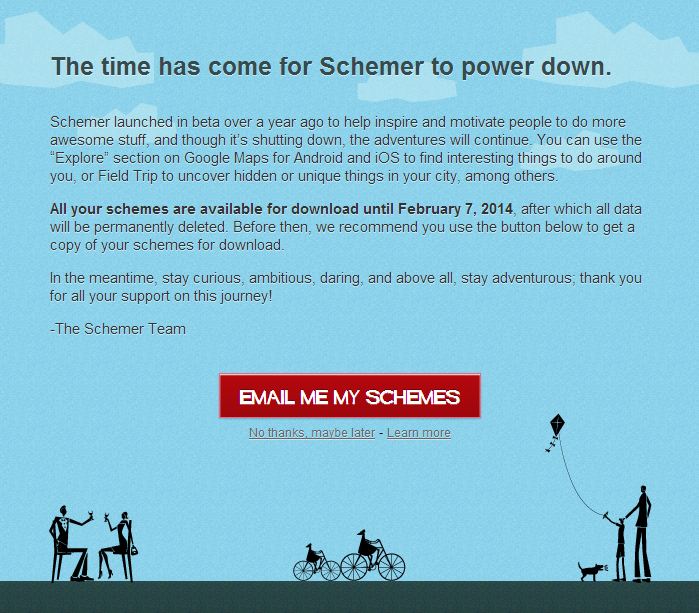 Yes! Google didn’t promote Schemer and we don’t know why?? And I’m a big fan of Schemer and I wish all those features will be seen in Google+ in future.