Home / Robotics / Erwin and the future of human-robot relationship

Erwin and the future of human-robot relationship

By Rajkumar Selvaraj on February 12, 2014@rajkumar_geek

Robots are being developed by many companies and universities around the world. Recent robotic acquisitions by Google clearly gives us the prediction how soon the factories and households will start using the bots.

We have to wait and see whether the they will help us or harm us in any way.

Think about a self-learning robot that will obey our commands and help us in the house. If a robot can teach maths and science to our children that will be a revolution in the world of education. If it can play tennis with us, we can introduce our new sports buddy to our friends.

Robot drives a car, which helps us to roam around the city. Okay, this imagination is enough as of now. Below is the news about two real robots created for developing human-robot interaction and to create a long lasting  relationship with humanity. 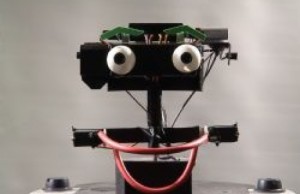 Scientists are analyzing the two robots 1. ERWIN (Emotional Robot with Intelligent Network)  2. KEEPON (non-emotive robot)  which are created by  Dr.John Murray, from the School of Computer Science,University of Lincoln, United Kingdom. They are researched in PhD study to  understand how more realistic long-term relationships can be developed between humans and robots.

This research will also help the scientists to a create relationship between robots and a child with autism, asperger syndrome or the attachment disorder. Scientists will introduce the “characteristics” and “personalities” to the robots. “Robots are increasingly being used in different fields, such as rescuing people from debris, medical surgeries, elderly support and As an aid for people who have autism”said Mriganka. Robot ERWIN can express five basic emotions while interacting with a human. The scientists also use Robot KEEPON to analyze how effectively people are interacting with this non-emotive  robot. It will help the scientists to compare which robot is doing better with a human and a child with autism. Also read Googles machine learning and robotic efforts to help human being