Yet Another Start-Up Acquisition From Google, Buys SlickLogin

By Sathishkumar Ayyasamy on February 17, 2014@yeahsathish

How does it sound.. Wait a minute, did I say sound?? Oh yeah, Sound waves. How you will feel when a sound waves replace your password?? Weird, isn’t it?? Yes, That’s why Google bought SlickLogin, an Israeli start-up that develops sound based password alternatives. The company is based on a novel idea to enable end users to log-in easily into password-protected websites by using a uniquely generated sound.

This concept of log-in using sound waves is completely unique and new but, Chirp is trying to build an entire file transfer protocol based on the idea.

This is very interesting when it comes to security. It’s always fun how a silent song can open your mail account or something related to login. SlickLogin launched their beta at Techcrunch SF, 2013.

The company is founded by three recent graduates of the IDF’s elite cyber security unit, namely Or Zelig, Eran Galili, Ori Kabeli. They have spent over 6 years working on the cutting edge of information security projects. SlickLogin’s three-person team revealed the acquisition in an announcement posted to the company’s Web Site. 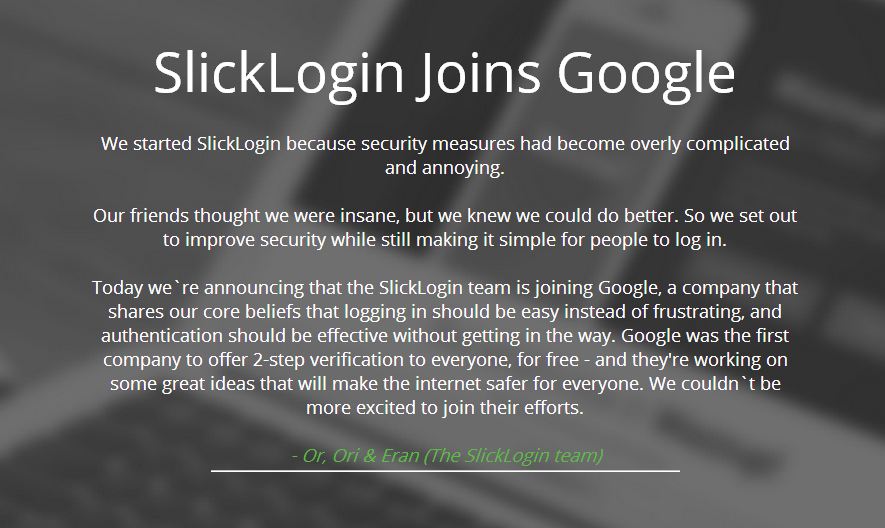 We think Google is way impressed by the team’s work towards this unique technology and acquisition is the conclusion. Google is trying to make our life too simpler.

The SlickLogin team will join Google’s research-and-development center in Israel, where they will be part of an existing team working on security and authentication technology.

SlickLogin were excited about this deal. “Google was the first company to offer two-step verification to everyone, for free — and they’re working on some great ideas that will make the internet safer for everyone. We couldn’t be more excited to join their efforts,”

The deal didn’t disclose yet. Keep an eye on “Yet Another Start-Up Acquisition From Google, Buys SlickLogin”. We will update you as soon as they announce the terms about the deal.

So who are these guys? What about security?? They enlightened us in a video below.