Home / Headlines / Facebook’s F8 Developer Conference Is Back in SF!

Facebook’s F8 Developer Conference Is Back in SF!

By Sathishkumar Ayyasamy on March 9, 2014@yeahsathish

It’s been almost three years since Facebook’s last F8 Developers Conference when they unveiled Timeline and Open Graph platform in 2011. Now, It’s going to be back with lot of updates on 4/30 in SF. 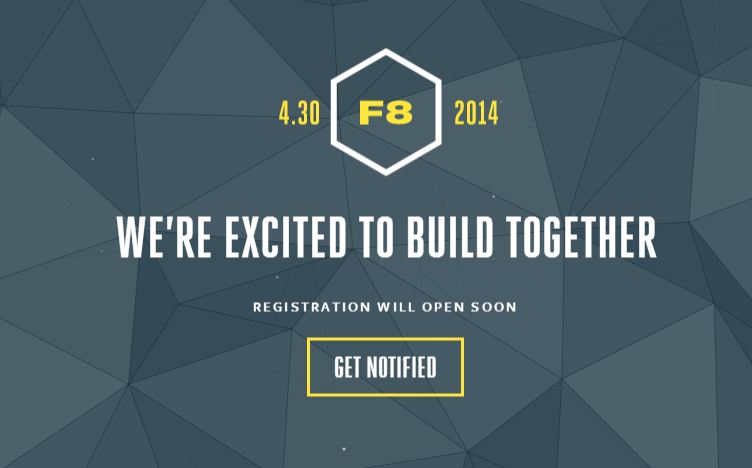 Facebook’s F8 is a mostly-annual conference held by Facebook, intended for developers and entrepreneurs who build products and services around the website. Facebook has often introduced new features, and made new announcements, at the conference. The name “F8” derives from the tradition at Facebook of having a big eight-hour Hackathon just after the event.

The first F8 event was held on May 24, 2007 where they introduced the notion of the social graph. At the second annual conference, which was held on July 23, 2008. They introduced the new Facebook profile and Integrating Facebook Connect into your website. The 2010 Facebook’s F8 event was held April 21, 2010 at SF. Some important announcements were made. The feature to add “Like” button to any piece of content on a website by the owner. Now, this feature is integrated within around 2.5 million websites worldwide, with 10,000 more being added daily. The other features are Open Graph Protocol, Graph API, OAuth 2.0.

The last F8 conference happened on September 22, 2011. Facebook introduced ‘Timeline’ that showed a history of user’s activity on their profile and also a broader version of ‘Open Graph’.

This event was mainly focused on introducing new products, transforming industries, building and growing social applications and product Q&A. Some of the details of the topics were:

Facebook sketched the agenda for the day like. “This year, we’re going back to our roots and having a pure developer conference. F8 will open with a morning keynote, followed by four tracks that will cover getting started guides, technical best practices, infrastructure strategies, engineering deep dives, and advertising tips  for making your app or game highly successful. We’ll also have sessions  dedicated to exploring how developers can take advantage of open source technologies.”

Facebook has not announced the speakers yet for the event, although the last Facebook’s F8 included a guest appearance by actor and former Saturday Night Live star Andy Samberg, who posed as CEO Mark Zuckerberg.

It’s safe to assume Zuckerberg will present at least once. We guess it’s going to be huge. Let’s wait and watch. Registration will open soon. You can Get Notified.