KUKA, The Fastest Robot On Earth Faces A Human!

By Sathishkumar Ayyasamy on March 16, 2014@yeahsathish

When it comes to robots, Germans learn better than the rest of us. Of course the best engineers come from Germany. What is the first thing that comes to mind when you think of a robot?? For many people it is a machine that imitates a human. But, Robotics brings together several very different engineering areas and skills.

KUKA (Keller und KnappichAugsburg), a German manufacturer of industrial robots and solutions for factory automation introduced a fastest robot on earth called “Agilus” that nearly beat a professional table tennis player at his own game – kind of. 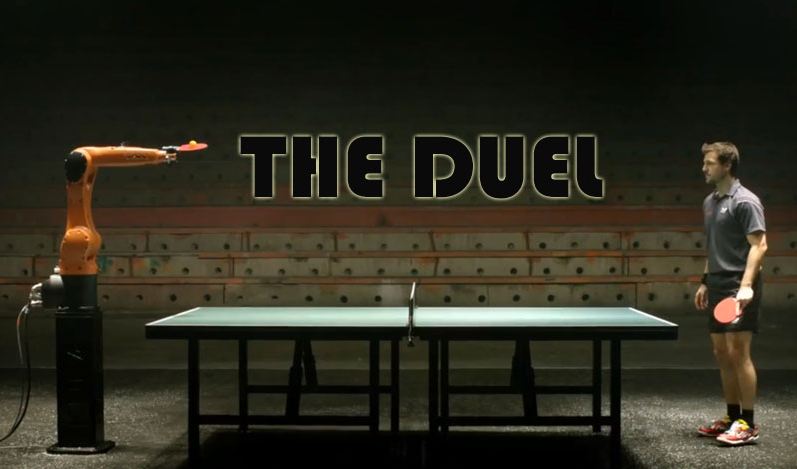 Tim Boll, a German TT player (Brand ambassador of KUKA Robotics), who held the No. 1 rank in the past and he is ranked eighth in the sport in global rankings was able to beat the robot by 11 to 9 in a tightly contested match organized by KUKA Robotics. According to the KUKA’s website, Agilus A.K.A (KR 6 R900) has a payload of 6 kilograms and has a reach of almost 3 feet. The robot itself weighs 52 kilograms and has been designed for operations such as handling materials, loading, unloading, packing and assembling and cutting machine tools etc,.

They introduced this robot to the public in Hollywood movie style with slow-motion effects. This gives a great first impression to the people, but it was edited heavily with a lot of effects though it looks cool. Watch the video below. This is a perfect example of how they do it.

At the end of it, they finished off in style statement. “Not the best in table tennis, but probably the best in robotics.”

Take a look behind the scenes of the thrilling commercial with Tim Boll and the KUKA KR Agilus robot.

1. The company was founded in 1898 in Augsburg, Germany, by Johann Josef Keller and Jacob Knappich

2. At first, the company focused on house and street lights, but soon expanded to other products (welding equipment and solutions; big containers), to become the market leader in communal vehicles in Europe by 1966.

4. Most robots are finished in “KUKA Orange” (the official corporate color) or black.

5. The KUKA, one of the best-known Germans in China has recently inaugurated a new robot production facility in Shanghai.