Robots have come a long way from their popular depictions as gargantuan warriors in the like of Voltron and the indifferent AI HAL9000. Smart technologies have entered our homes and lives in the form of smart phones, to begin with, and have shown themselves as nothing but useful. Today, robots of all shapes and purposes assist humans in everyday tasks, and venture where we cannot. We have robots on the moon, but we also have medical robots performing surgeries and saving lives where it counts the most. As Maja Mataric, a computer science professor at the University of Southern California correctly puts it: “We need to think about the humane and ethical use of technology, because these things are coming.”

Where robots are primarily used for tasks that humans cannot do due to physical limitations, AIST, a leading Japanese industrial automation pioneer consideredanother option. There are tasks that humans can do, but simply won’t, tasks that cannot be taken over by another person. Calling them “tasks” is a little off-putting, because the battle AIST took on is the battle on dementia and loneliness among the elderly, something most people tend to shun.

Meet PARO, a robotic baby harp seal designed to engage elderly nursing home residents. It is equipped with tactile, light, auditory, temperature and posture sensors, and as a result, it moves, makes sounds and learns from your interactions with it as if it were alive.

It is much like owning a pet, but without the mess. Most nursing homes own cats, and allow dogs to come visit, and there have been numerous successful studies on animals helping in assistive therapy. However, animals can be messy and loud, and both are big issues when dealing with the frail and the elderly. Robotic pets are not a new invention, but the explicit design for PARO as an assistive robot for nursing homes makes it a valuable therapy tool, niche-specific.

Stefmar have been asked about their thoughts on PARO, and the fear that application of robots in the place of pets might spread out from the PARO case. Though living pets require all the cleaning, feeding, training, and looking after that robotic pets don’t, PARO, with all its charm, is clearly not a real pet. It is soft, warm, responsive, and has the voice of a genuine baby seal. It is definitely cute, and its purpose is noble. But it is not alive, and it is incapable of creating the mutual bond that animals and their humans share. Such bonds can only be shared between living creatures, where feelings of friendship are mutual. PARO learns from its previous actions, but this does not count as an interaction. It is a specifically tailored robot, not a family pet. 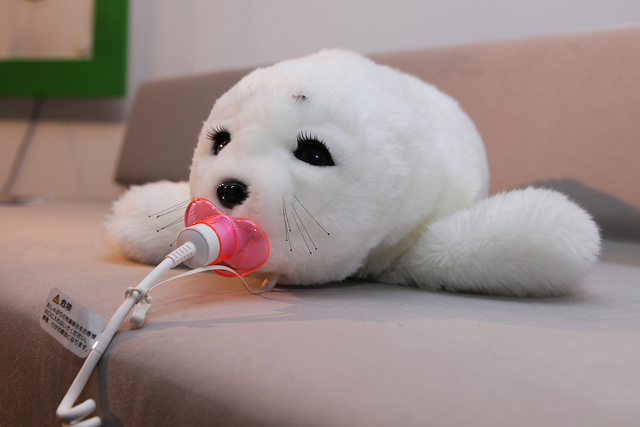 The technological aspect of PARO also stirred some doubt.PARO’s critics fear that socialization with robots rather than human beings can retrogress the already minimal attention the elderly are receiving, and that such relationships play a large role in entirely substituting human caregivers for robots.

Others will argue that there are simply not enough people working in nursing homes worldwide to take care of the ever increasing population of elderly patients. Robots such as PARO are not designed to take away human contact, but to provide some sort of contact at any given time. It is designed specifically to reduce stress and engage patients in a positive interaction. PARO also holds the world record for the World’s Most Therapeutic Robot.

PARO is held in great acclaim for the way it promotes socialization, not just for the services it provides on its own. Isolation is a major cause for concern among the elderly suffering from dementia. When exposed to PARO, nursing home occupants are more likely to leave their room, and not only interact with the robot, but also socialize with their peers and caregivers. They have admitted to feeling much more relaxed and at ease with the robot than without, requiring less medication.

PARO will never be the equivalent of human contact and a visit from the family, but it sure brightens up the lonely life in a nursing home.

Leana Thorne is a blogger finding a way to become an influential online presence. Words are her swords, news is the battleground, and technology is her war. Always is happy to speak the truth, spread some info, be of help and add value to online world.
Related Itemsarticleshuman aidrobotRobotics
← Previous Story The Dawn of Business-Friendly Robots
Next Story → DARPA Project: Combining Robotics and Shipping Containers for Disaster Relief