Must Know: 10 Awesome but Weird Uses of 3D Printing!

Much has been written about 3D printing, or additive manufacturing, and its uses. Technology enthusiasts are open yet cautious about the benefits of this technology. 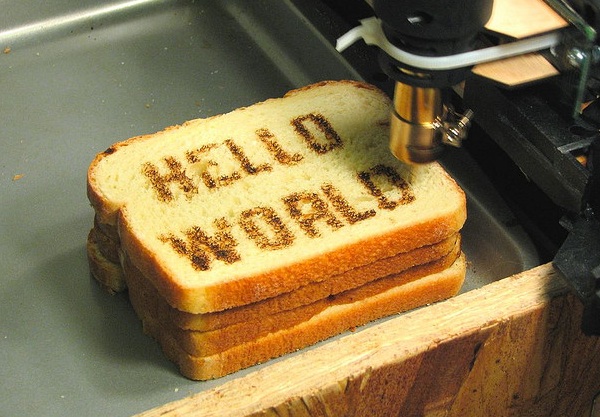 Some weird uses of 3D printing that people have come up with are described below:

1. Smooth food for old people
Old age brings with it several problems; one of them is food. Elderly people lose their appetites. In addition, they are forced to eat pureed food which further kills their wish to eat. 3D printing could have a solution to this problem. Pureed food can be reconstructed into shapes of actual food using silicon molds. Nutritional supplements can also be directly blended into these food shapes.

2. Spare parts for household goods
Instead of heading out to the nearest hardware store to buy spare parts, you could “print” your own spare parts at home using a 3D printer. Although it would require a few hours, but with more advances in technology, this could become feasible and less expensive.

3. Warfare
The world’s first 3D printed gun, Liberator, has proved that anybody with access to the blueprints and a 3D printer can manufacture their own weapons. Also, the British defense company BAE has claimed that it has successfully flown a Tornado jet made of parts that were 3D printed, such as the cockpit radio cover and landing gear components. Potentially, 3D printed parts can save a lot of money in maintenance and refitting costs.

4. Fixing broken bones
The advantage of 3D printing is that it enables the creation of customized products without the need for a corresponding machine. One machine can create an unlimited number of personalized objects. A patient who had lost half of the pelvis was fitted with a 3D printed titanium pelvis. The 3D printed bone was coated with a mineral onto which the bone was allowed to grow. A standard hip replacement was fitted into the socket. 3D printing is particularly useful for children who need prosthetic limbs, since they need to be changed as the child grows.

5. Heart transplantation
3D printing can potentially create functioning body parts. The implications of this application are mind-boggling the parts can be made locally, anywhere in the world; the healthy tissue could be made compatible with the patient; and transplant patients would not have to wait for an organ. However, more research is required to bring the cost of 3D printed organs lower. Currently, this application is in the test phase.

6. Clothing
3D printed clothes can be made to suit individual body shape and size. It could also prove a boon for people with extra-large or odd-sized feet.

7. Drones
Traditionally-made drones require nails and screws, which make them heavier than 3D printed ones. Southampton University has created a drone using 3D printed parts, which can fly at a speed of 90 miles per hour and has a wingspan of 2 meters. It takes only 10 minutes to assemble the drone and is almost silent when cruising, due to its lightness.

8. Doll-size replica of yourself
The Clone Factory, a shop in Tokyo, sells 3D printed doll-size replicas of your head. Using programming software and fully dimensional pictures of you, the shop creates a replica. Costing $1,800, these heads are said to be popular during weddings.

9. Racecars
Engineers in Belgium have created a race car entirely out of 3D printed parts. Called Areion, the racecar was built by mammoth stereolithography, a technique wherein large, customized objects can be printed. A chassis made by a 3D printer has been used for Areion.
Weighing 617 pounds, the car has a double-A carbon wishbone suspension, a composite racing seat, and a bio-composite electric drivetrain. The car is able to reach a top speed of 88 mph, and can go from 0 to 62 mph in 3.2 seconds. The car is powered by 50-volt lithium batteries that send a charge of 85kw to the motor.
To keep the motor cool, a 3D printed nozzle and diffuser have been fitted. Also, to the left, a fan situated behind the radiator draws in air. 3D printed channels were fixed to the right of the shell in order to create a cyclone effect and prevent water and dirt from getting suspended in the air entering the engine.

10. Meat
Imagine printing out your own meat supply! That’s exactly what Modern Meadow, a Missouri-based startup intends to do. The company has received a grant of $350,000 from the Thiel Foundation to conduct research on bioprinting. If its research on leather products is successful, it will move on to making edible meat.

Garry Forster is an Online Consultant for 3dstuffmaker. He likes to blog on 3D printing Events, Ideas, Technologies which are related to 3D Printing and 3D Printing Tutorial. Follow him on Google+ .
Related Items3Dtechnology
← Previous Story WhatsApp iPhone App Gets Update With Number Of New Features!
Next Story → Yahoo Acquired An Indian Startup Bookpad!